Libya: From Tripoli War to Struggle Against Gaddafi

Tuesday, 22 February 2011
The outbreak of the riots in Libya just after Tunisia and Egypt (Libia is geographically between these two) makes evident that the riots in North Africa has caused domino effect. However, the situation of Libya may slightly be differentiated as compared with Tunisia and Egypt.
The Libyans have learned from the examples of Egypt and Tunisia that they must keep going on their protests until pulling down the regime and sending the leader Gaddafi away, yet having found out that the reason of the knock-down of the governments of Tunisia and Egypt was due to not taking rigorous measures, Gaddafi is now resisting and oppressing the people without caring about the reaction of the world. The allegation that he has hired special snipers from Serbia and Africa and has been paying them 10 thousand dollars per day as well as extra money for shooting the rebels is being more and more strong by the doctors declaring that the injured and the dead brought to hospitals have been shot in the head or in the heart.
We know that so far the death toll has just passed 250, that Gaddafi as well as the dissidents have the intention of taking the job until the end which may result in a significant rise in the total casualties, also that the description of Gaddafi's son Saif al-Islam came within an ace of menacing the people with civil war. Another important point in his speech was declaring it was the Turks (so one of the direct targets of the Gaddafi partisans would be Turks) and the Italians who had provoked the opposition. At short notice, Muammar Gaddafi had given Turkey’s Prime Minister Erdogan a human rights award, thus it becomes a topic of curiosity what reasons lay under such an accusation against Turks. Furthermore we should take into account that approximately 25 thousand Turkish citizens work in Libya presently, especially in the building sector. 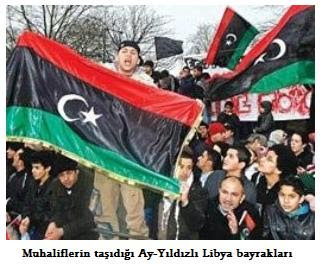 Turkey's relationship with Libya is based on a historical depth for it was the last North African region to part with by the Ottoman Empire. Tripoli War came out while the empire was still on the Balkan War, so the Ottoman Empire was forced to ask for peace from Italy. The Ottoman province Tripoli (current Libya) was left to the Italians with the Treaty of Ushi after the Tripoli War in 1911. The supporters of Mustapha Kemal and Enver Pashas before the Treaty of Ushi within the war against the Italians were the same Arab tribes who are now revolting against Gaddafi. Clearly does the old Libyan flag with red, green and black colors on the moon-star carried by the dissidents symbolize this. It is the tribes of eastern provinces who back up Sheikh Idris, the independance leader and Libya’s first king, (overthrown by Muammar Gaddafi in 1969 while he was under treatment in Turkey) who are now leading the revolt. The tribes who had been opposing to the Italian colonialism and relying on Mustapha Kemal and Enver Pashas in 1911 were on the side of famous Omar Mukhtar after the drawing back of the Ottoman Empire from Libya. Omar Mukhtar was swung by the Italians, and it was Sheikh Idris who moved the country to independence. Today, the same tribes, starting their struggle for independance on the side of Mustapha Kemal and Enver Pashas, maintaining it with Sheikh Idris and with Omar Mukhtar are trying hard to put an end to the period of Muammar Gaddafi (of whom they were victims) so as to return to historical continuity. That’s why they are using the red-green-black colored moon-star flag instead of the green colored Libyen flag, the icon of Gaddafi.
Under the circumstances, what does it mean the cold-blooded position of Turkey about the events in Libya in terms of reelpolitik? Turkey desires surely to see the end of 42 years of rule of Muammar Gaddafi and the beginning of a new era of tranquil, peace and stability. However we can refer to Turkish citizens over than 25000 and to investments of Turkish companies as proof of Turkey’s cold-blooded attitude. The remark of Turkish Foreign Minister as “Just like in other countries, the demands of people must be satisfied” emphasizes actually the necessity of Gaddafi’s departure without losing the deliberate manner. For there are still many Turkish citizens and also capital assets in the region and that Saif al-Islam has offically accused Turks of causing the events, it seems now very difficult for Turkish government to take forward steps at the cost of jeopardizing her citizens and businessmen.
BURAK YALIM,
Wise Men Center for Strategic Studies
International Relations Studies Of Turkey (IRST) Platform (www.tuicakademi.org)
General Coordinator
Translated by: Gökçe Hubar
Hiç yorum yok: